For this month’s blogpost I brought the box of bad writing down from the attic. That took courage. It’s been years since I looked into it. I didn’t know what I’d find inside. I discovered an unofficial account of my life, mostly from 1990 to 1998 i.e. from  16 to 24 years old. I am in my early forties now, but much of what I found hasn’t lost its power to embarrass me. 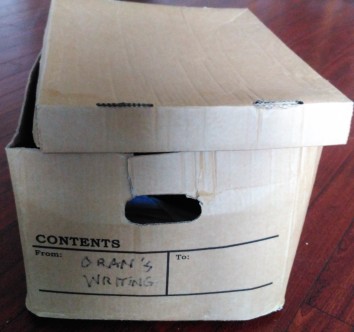 Here’s the top 10 fails of my life in bad writing.

There’s one memento of my early writing years in the box. It’s my primary school poetry book.

I remember writing this fragment of a poem. No one asked me to do it. I just wanted to write a poem.

Yes, I wrote myself into a corner with an attempt to link dolmens and dolphins, but this fail is actually an early success story. Why? Because this is a first draft.

The second draft was the one I showed my teacher. She made one correction and had me read it out to my class. My first ever public reading. 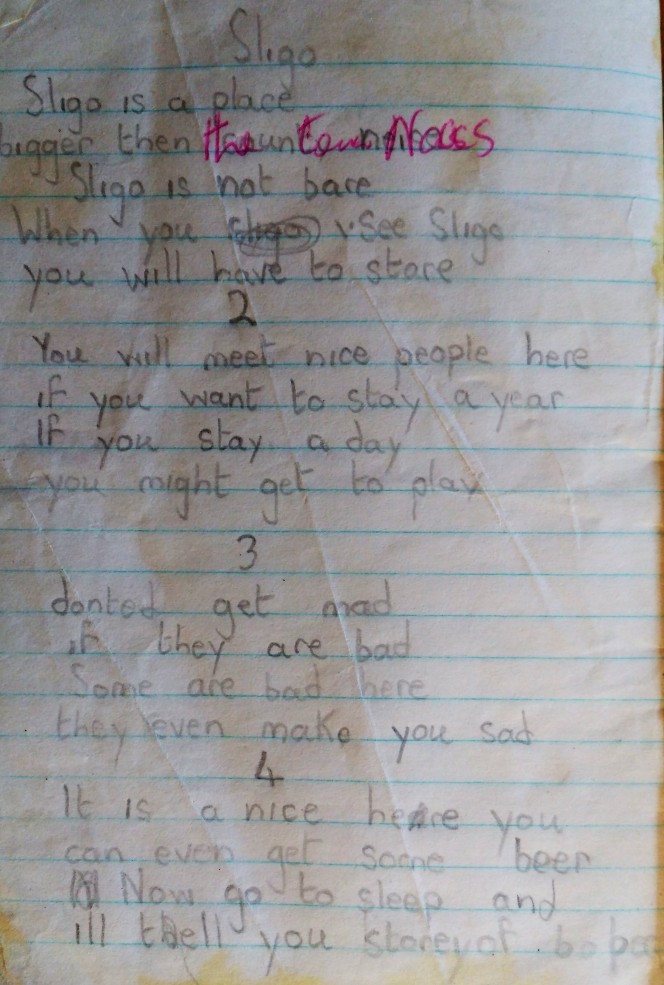 I was 16 when I started writing into a hardback notebook. Inspired perhaps by Twin Peaks, it was an effort to keep a diary. 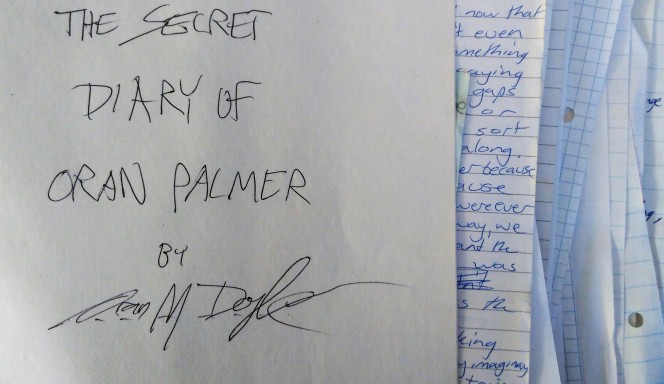 The diary entries never really took off, but so many hopes and dreams and self-consciousness and loneliness are crammed into my poetry in it. It was hard to choose one piece for this blog, but I think ‘In My Kingdom’ captures me at that time.

There’s a note written on the margins of the page. It might be a line meant for the scribbled out section, but I like to think it’s a comment on the poem.

Around the age of 17 I pivoted and attempted my first novel. I find the first or maybe second page in the box. It’s faded and yellowed now, like an ancient scroll printed with a dot matrix printer. 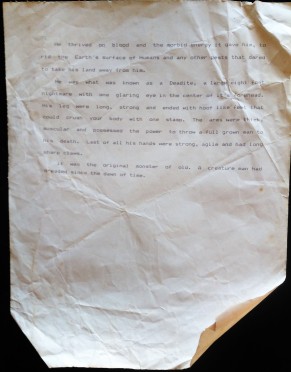 Inspired by horror films and Stephen King and Lovecraft, I attempted a powerful first line:

He thrived on blood and the morbid energy it gave him, to rid the Earth’s surface of Humans and any other pests that dared to take his land away from him.

I don’t think I wrote more than two pages. And it was 24 years later before I completed a novel.

18 years old. I returned to poetry. My usual mode of writing was to write 10 poems at midnight in a burst of unfocused creativity, but for once I lingered over one poem. It would be the poem on which I’d stake my claim as a true writer. It was called:

I submitted it to my school literary magazine for their poetry awards. When the day came and the awards were to be announced in the school hall, I waited in my seat to hear if my poem would win anything for its moving and sincere exploration of loneliness, mortality and bad breath. 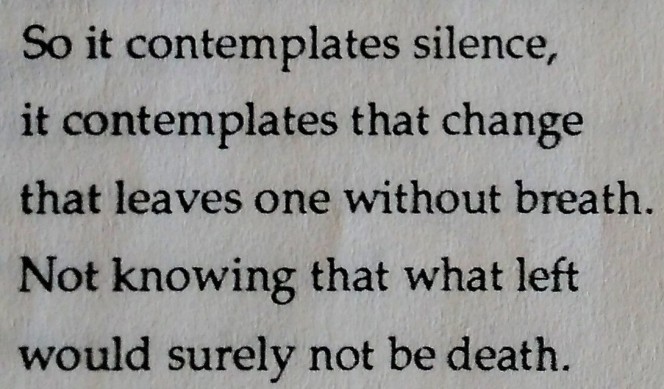 It didn’t win anything. Maybe the literary world wasn’t ready for it.

But the short story that I had thrown together quickly won first place. It is still my proudest writing moment. Might always be. The  first line of the judge’s comments on my story said ‘It’s almost scary that someone this young writes this well.’

I long to hear someone say that about my writing now. With or without a reference to my age.

19 years old.  I spent a month in Budapest with my charismatic, troubled, Hungarian friend and his family. I spent that month wandering the streets wanting to be a bohemian and gripping this book. 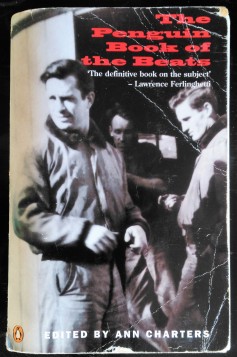 This book inspired a lot of bad poetry, including at least self-aware:

This poem is too long and perhaps too raw and powerful for this blog post, but the final lines give an idea of its style:

Oddly this poem doesn’t embarrass me now. Like right now still, I was trying T R Y I N G trying to find my voice.

20 years old. A year into my Communication Studies BA. I wanted to be a filmmaker, but wasn’t sure in what way. I considered turning my hand to documentary film making to mine my gritty life experiences:

It never went further than this sheet of paper.Thank God. Although I have to admit that ‘The history of my hair’ was prescient.

In the bad writing box, I find literally fifty if not a hundred terrible ideas for short films and features. There’s even two pages of attempts at controversial short films titled:

The final idea on the sheet suggests how little I liked dinner parties:

An eighteen year old kid is sitting in his bedroom while his parents have a dinner party and his parents come up and get him to come down to meet the guests and they torture and kill him.

Yes, it’s a terrible idea, but it’s sweet that my deepest fears still related to my parents. And it’s sad that part of me feared I was unlovable. But it’s inspiring that I kept coming up with idea after idea after idea even when they were terrible.

In the box I find VHS tapes of short films that I and friends made in college. They include such  hits on it as ‘An Accountant’s Life’ in which an accountant becomes a super hero. And ‘Stuck on You’ where a guy gets a coke can stuck on his finger and will do anything to get it off.

But I can’t find a script or copy of ‘On a Distant Planet’. I wrote and directed it in my last year in college. It had a plot line which I still think is great. Preaching a positive, open message, it tells that story of  a Star Wars fanatic who thinks he might be gay after he dreams Darth Vader kissed him. Fun right?

The only problem was that it wasn’t a comedy. It was a heartfelt drama. It was slow paced and dull. It was terrible. Terrible. I wish there was someway to convey here how bad it was here.

23 years old. I was just a year out of college. I was script reading for Venus Productions, a production company run by Anna Devlin and Marina Hughes. They were making a film with Miramax and at the top of their game. They asked me if I had any projects that I wanted to develop with them. Excited, I put a two pager together with an idea. I must have had a spare copy as I find a signed copy of it with a date and an attempt at a funny sign off in the box.

I waited politely for their response to it, but I never heard anything back. I never asked either. Too timid.  Over time Marina became a friend of mine. Years later I asked Marina why they never responded to it? She reminded me of the tag line. She didn’t have to say more. I cringed.

But despite that, Marina stuck with me. With little evidence to go on, she trusted I had talent and worked with me on other projects. And I always appreciate that.

This 10th and final piece of bad writing was written when I was 24 years old.  I was writing a romantic comedy feature about a woman who crashes her car into hot male drivers to try to pick them up. There are many reasons why this isn’t a good film idea, but to know how bad it really was just read my character description of my protagonist:

Okay. So far so good.

Is it over yet? No. There’s a final classy touch.

I formally apologise here for my 24 year old self.

But it’s too easy for me to cringe and laugh at these 10 past writing fails and feel superior. So lets have one final fail, the 11th, the one that I didn’t find in the attic.

The novel I’m writing. This blog post. The other ideas that I have for novels or screenplays. I can’t fool myself that what I’m writing now is an exception to the pattern outlined in this blog. Everything I’m writing now may end up in the box in the attic or its cyber equivalent.

Like all those incarnations of myself as a writer, I can keep on writing and let the chips fall where they may. I can dare to fail.

What about you? Do you have any bad writing in your attic or hidden in your laptop hard drive? Tell me all about it. Show it to the world.