Everyone says there’s no sense in crying over spilt milk. If you can’t change something that’s gone wrong then you should forget it and move on, right?

Well that’s a lot easier said than done. And it’s harder for some of us than others.  I don’t know about you, but I can find it a challenge to be positive and not focus on the ‘bad’ experiences in life, regret choices I made and wish things had gone differently. Even the small day to day experiences that go ‘wrong’ can wreck my head.

I’m a writer and a stay at home parent for two school age kids. For a while they seemed to love spilling milk. They did it all the time. I’d turn my back – splash! – the floor or table or counter would be a mess. I’d get furious every time it happened. Every time. I’d demand they tidy it up. There would be ultimatums and tears. Sometimes almost mine, especially if it was the 3rd spill of the day.

But, do you know what? Me getting angry, the tears, the fights, none of it made any difference. My kids just kept spilling the milk as kids will do. It was wrecking my head so I had to do something different.

I decided to photograph the milk spills each time they happened. Nothing fancy. Just on my phone. Nothing too arty. I’ve never been much of a photographer.

But it changed everything.

And here’s the eight things I learnt about coping with life from spilt milk:

1. Changing how you approach an experience changes everything: The moment I started photographing the spills everything changed. Literally from the first shot, I stopped being angry with the children at the spillage. Instead I rushed for my phone. The kids gathered around me while I took the photo. The fights stopped. Spilling milk was now fun! 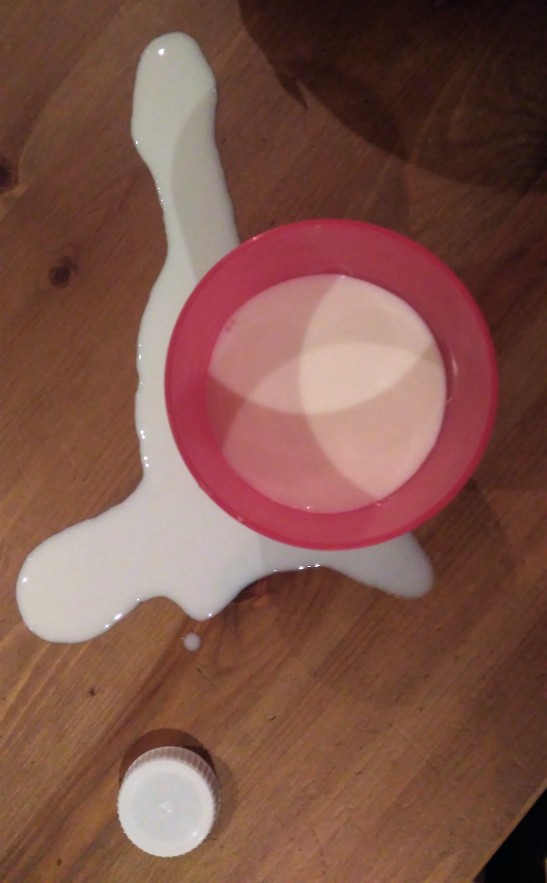 2. Every experience is interesting, even the ‘bad’ ones: We didn’t just photograph the spills. We talked about the spills. Compared them. Like snow flakes or (if you’re feeling morbid) blood splatter, we discovered that each milk spill was unique.

3. There’s beauty in all experiences even the ‘bad’ ones: We found the spills surprising beautiful. They were all different ways. Some spills exploded outwards like stars. 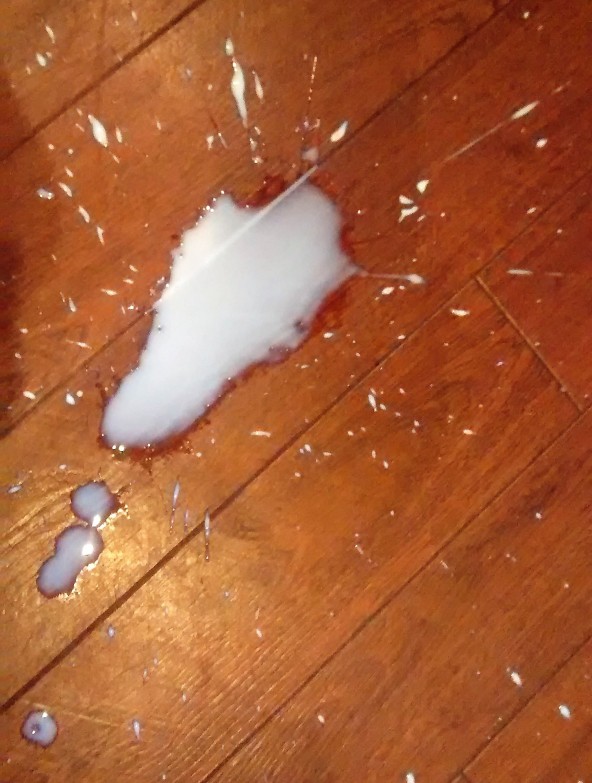 Others pooled slowly across the table.

4. All experiences can feed your imagination: Like lying on the grass and looking at clouds, we began seeing recognizable shapes in the random mess of milk. I personally think this one looks like a heart.

And my kids think this one is a rabbit!

5. Any experience can be made into art: My son took it the next step. He began making pictures with the milk using his finger as a brush.  Perhaps he’ll go one to become one of the world’s foremost milk artists. Here’s an early work – a man he created.

6. Don’t cling too tightly to your response to experiences:  I got a bit obsessive with this new angle on milk spills. I wanted to document every single milk spill. Realizing this, my children found a new game. The moment the milk spilled, I’d rush for my phone and they’d rush to get a t-towel to clean it up. Those little feckers! Still least they were cleaning up. They’d never rushed to clean up anything before.

7. It’s easy to slip back into old patterns: Time passed. My children stopped spilling milk as often as they got older. I got out of the habit of photographing the few spills that did happen. Eventually we forgot to photograph them entirely. After a while, when one of them spilled milk, I just saw it as a bad experience, got irritated again, and the fights and tears returned. 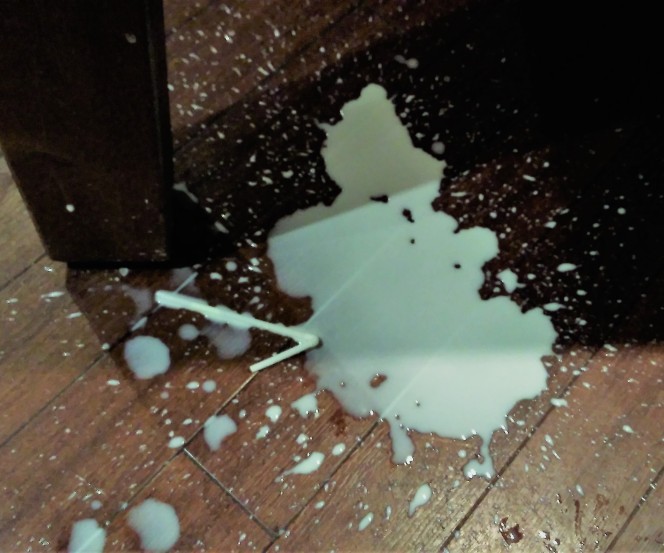 8. There’s always a new opportunity for change: As I started to compose this blog, the milk spilling seemed to start again. But as I had told my kids I was doing this blog, when the milk spilled they called to me, ‘Take a photo dad!’ My frustration slipped away. I got my phone. We gathered around. Admired the spill. We took the photo.

And I was back on track.

What helps you cope with the literal and metaphorical spilt milk in your life?