Lego is all over our house. Under our feet. Down the back of the couch.  I spend much of my time as a parent shouting at my 10 year old son and 6 year old daughter to pick it up or to put it down and eat their breakfast or to tidy it in the sitting room if they want to get to watch TV. 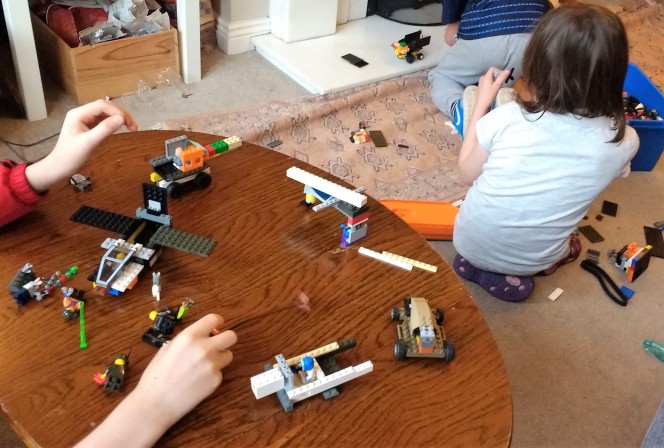 I complained about Lego so much that I told my children this blogpost would be about Lego, but couldn’t get my head around what to do. My son suggested the blogpost should be about how Lego allows him to express his imagination. He used those actual words, probably because I talk a lot about imagination a lot. It was a lot better than my ideas so on Wednesday we sat down in the kitchen with a couple of boxes of Lego and got going. And what came out it surprised me.

Inspired by the recent Legomasters  Channel4 series that was a big hit in this household, my son asked for Lego building challenges to do with his imagination. My daughter refused to do any of these challenges. She just built what she wanted.  That day they built a whole range of things to show me. 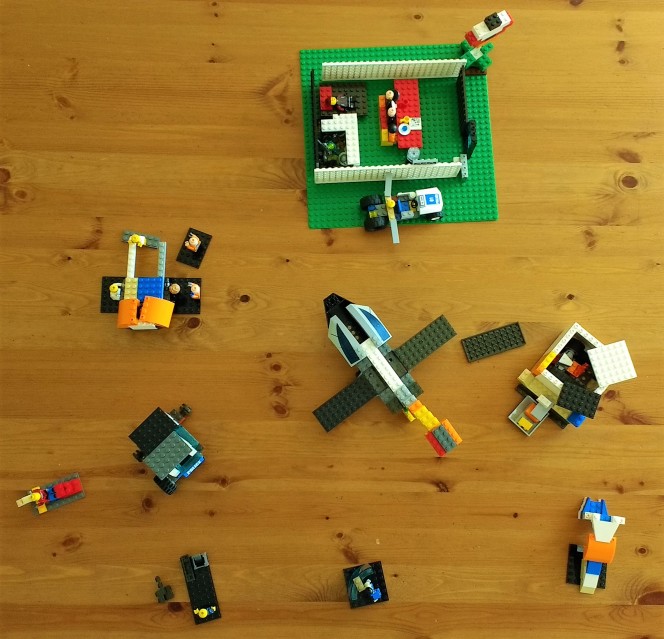 For the first challenge, I asked my son to imagine that his imagination was a machine – what would it look like and how would it work? He build this. Hmm, I said, it looks looks like a box. He suggested I look a little closer so I did.

He said that the coloured blocks were ideas from our imagination. These ideas slide off the grey conveyor belt at the back of the machine and get stacked up in the grey container for delivery when it’s full. 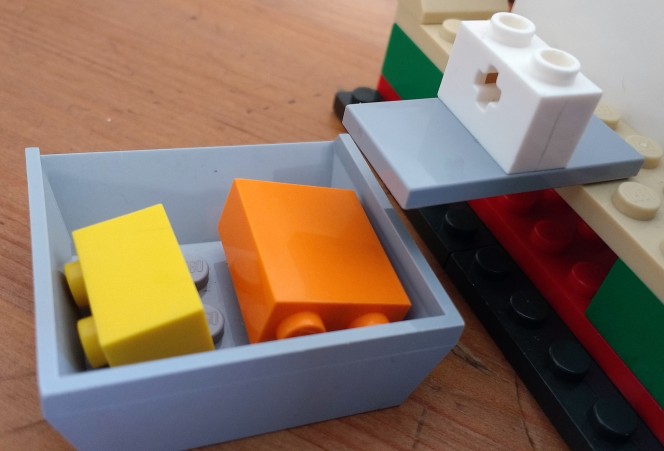 He opened up the machine for me so I could see its inner workings and machinery.

I got up close to it and saw that in the centre of the machine was a flame that generates the ideas in the imagination. That flicker in all of us that gets everything idea started.

My daughter interrupted us and presented me with a car. I told her that it looked a little like the Popemobile. She liked that. She said she’d call it that from now on. 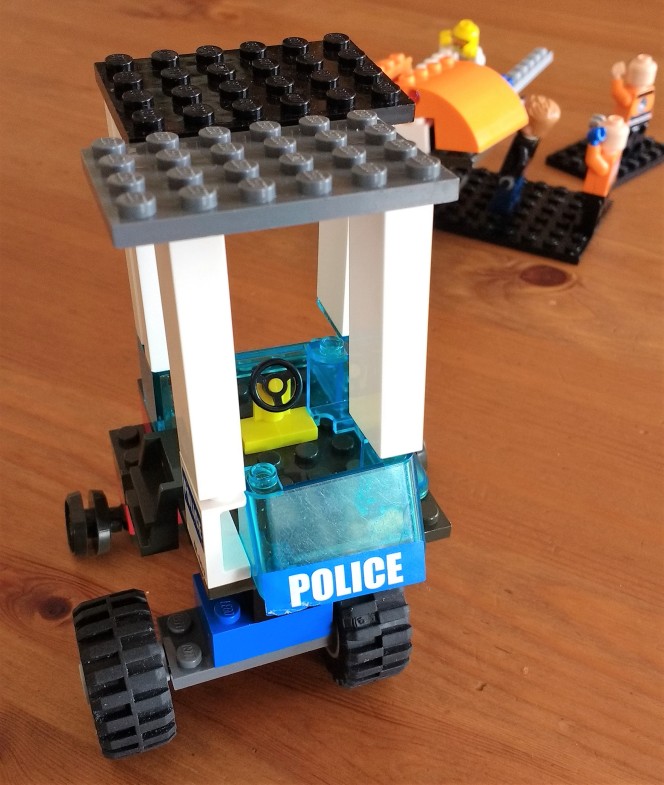 My son asked for another challenge so I asked how do these ideas go from being individual blocks to becoming our thoughts? He quickly rustled something up. It confused me a little at first. I thought it was a sort of shower, but I looked closer. 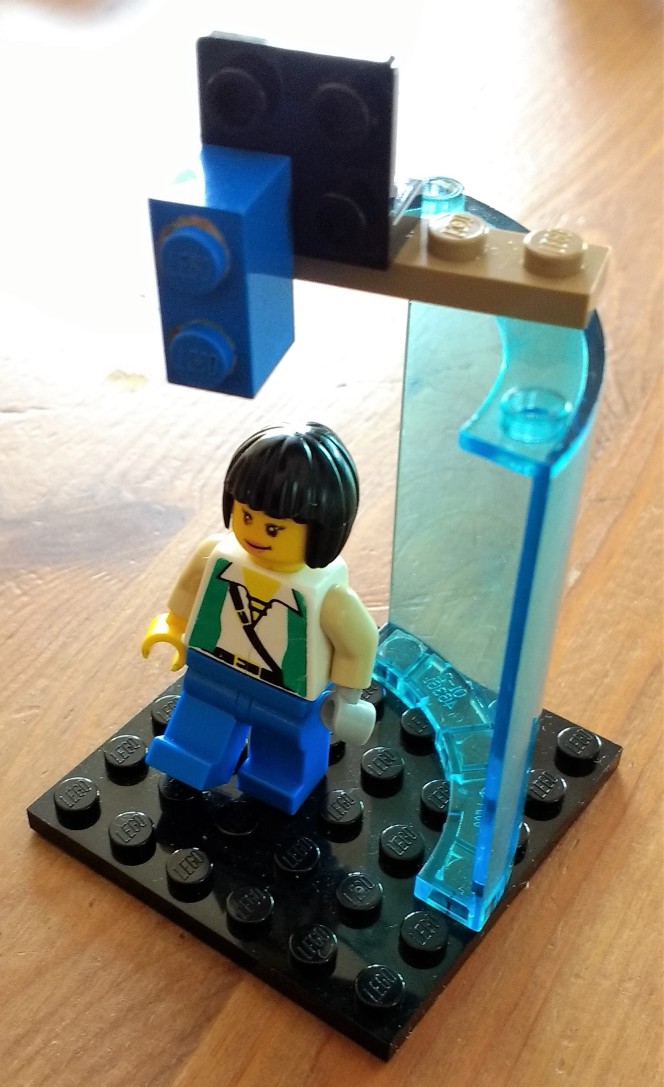 He told me to imagine that the blue translucent piece behind the Lego woman was invisible, that the beige and black pieces were invisible too.  A single idea in the form of a blue block floats above this lady as she walks nonchalantly. When it rains the idea mixes in with the droplets of rain and seeps into her skin and it becomes her idea. So I wasn’t entirely wrong – it was a sort of shower after all.

For the next challenge I asked my son to make an idea from his imagination that makes him happy. He loved this challenge. While he worked, my daughter arrived over with one of the cars her brother had made earlier in the week, but with bits she’d added ‘to make it cooler’ – the wings, the shiny bits, and the yellow, bespectacled head between the propellers. 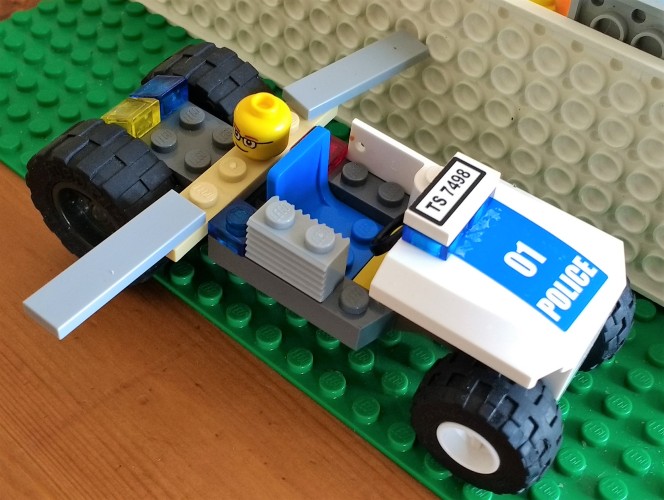 My son finished his joyful creation and placed it down in front of me. Showed me how the front of it opened and closed like a mouth.  That it was half animal. 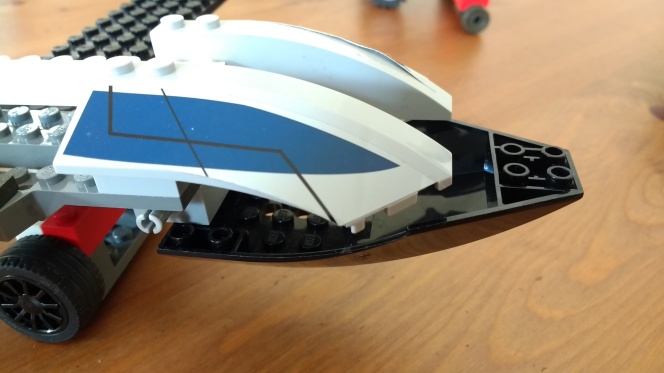 The other half of it was an airplane. He told me that it made him happy because he could imagine himself as its pilot. 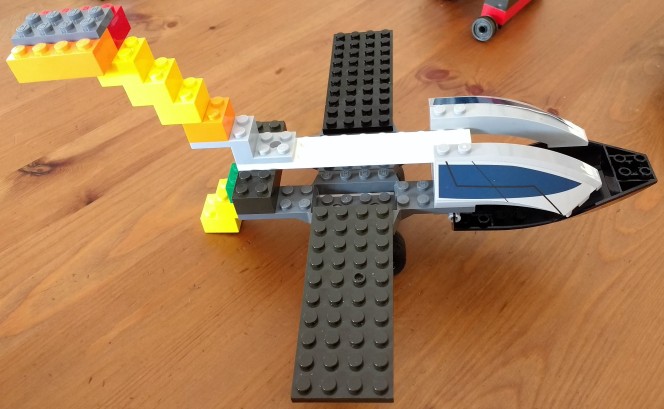 For his last challenge, I pointed out that our imagination doesn’t always give us ideas that are happy. Sometimes it gives us ideas that are scary or sad or upsetting. I asked him to make something from one of those ideas. I expected a monster, but he something else in front of me. He said it was a funeral. Those were people carrying an orange coffin. I immediately looked a little closer at it.

He told me that the man at the side was a mourner. To me, he looked angry, raging at his loss.

But there was more to see. My son cracked open the coffin. There was a body inside it.

I looked at the face of the man inside. Maybe it was just a random choice of a Lego figure, but it looked like he was crying.

I was a little taken aback. I’d seen a little glimpse into my ten year old’s fear and seen the same fears that can haunt so many grown ups. Fear of loss of loved ones, of pain of grief, of death itself. But then my daughter shoved herself in front of my son and I. She pushed his funeral aside and presented us with this.

Proud of her work she’d done on a house that she made last week, she pointed out the new tall, see through cake, the men with their plates, the man asleep at the back of the room after too much fun. My daughter had made a birthday party. 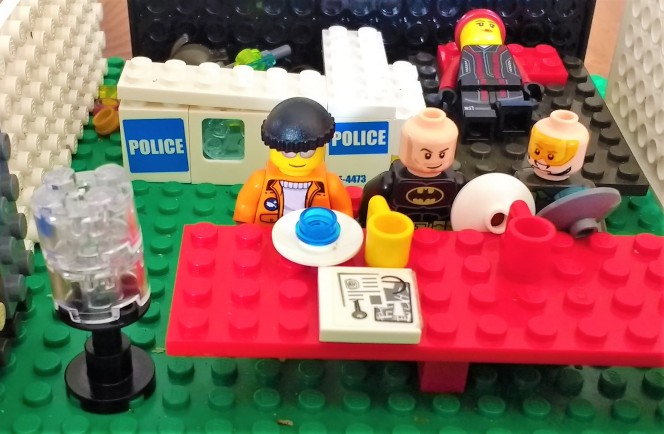 In this party, the funeral, in all of these pieces, there was a whole Lego shaped world of my children’s imaginations, their hopes and their fears. A whole world I usually stepped over or pushed out of the way so we could get ahead with the busyness of our lives.

It was a reminder to me that with Lego as with children, we should always look a little closer.

To finish, I asked my son what a world without imagination would look like. He swept the blocks out of the way and had me take this photograph.