The rain was falling hard by the time we drove back into the campsite. We parked next to the lake but could barely see it for the clouds. It looked like the rain was down for the afternoon, hammering on the roof of the car, thrumming on the windows.

All that awaited us in our tent was endless bickering and sniping between my two kids (‘He keeps hitting me’, ‘Get off my side of the bed’, ‘she hit me,’ ‘Aargh’ ) and a constant repeat of that already much repeated explanation of why we were not going to drive for forty five minutes to a cinema just because it was raining.

So, while my wife ran off to go have a shower, the rest of us stayed in the car. My son and I put feet up on the dashboard, lowered the seat backs. My daughter lay on the rear seat. We put our faces up to the windscreens and wiped away the condensation and could just about see the trees around us.

My mouth opened with surprised when I saw it. I pointed out the window.

My daughter looked a little closer.

‘What happened to its ear?’

But it wasn’t just the one rabbit with only one ear. There were a few rabbits. They were stopped at the top of a slope which descended down to a valley. What were they looking at? We peered forward to see.

Down below, there was a small farm and from inside, there came screams and then an iron infested Gorm fighter manhandled and beat a farmer, throwing him onto the ground. Another Gorm dragged the farmer’s wife out of the house as she desperately tried to cling on to her three terrified children. The evil soldiers raised their swords.

My children and I looked at each other – were we about to witness a massacre?

We could make out the rabbits near us perfectly clearly now and putting our ears close to the windscreen glass, we hear them speak.

‘They are Gorm, and my Goddess demands that they be stopped.’ 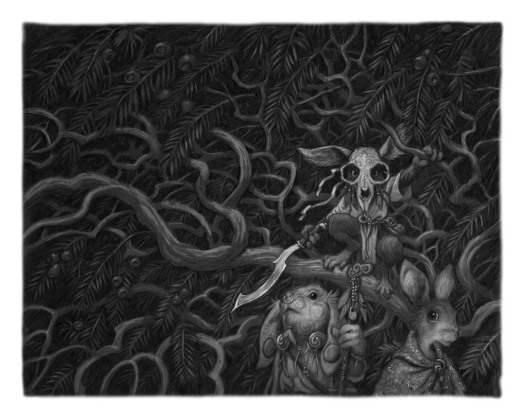 Her skull mask tight on her face, Zarsa was one of the feared Bonedancers – the greatest assassins in all the of the five realms. She would stop the Gorm or die trying, but she wasn’t the only one unwilling to stand by and watch, Mash joined her.

‘We can’t just leave those rabbits down there. The Gorm will slaughter them.’

Even though their leader, Crom, argued logically for the importance of their mission over this one family, he soon set off down the hill after them.

‘Hern’s antlers,’ the blind warrior cursed as charged into battle.

We’d have cheered if we hadn’t been scared to alert the Gorm to our presence too. Yet soon the battle turned against those heroic rabbits. Blades clashed but nothing could get through the blackened metal of the Gorm armour. Paz, though still only a child herself, ran down to help them yet that made no difference.

Podkin One Ear, our hero, felt the same fear we felt. He was flawed as we were. We waited with him to see who would emerge victorious from the battle. We all prayed it would be those on the side of the Goddess.

I checked my watch quickly. I wondered how long it would take for the car battery to be drained by playing the audiobook CDs of Kieran Larwood’s ‘The Gift of Dark Hollow’. It was the second book in his Podkin One Ear series. We’d borrowed it from the library for the car journey down here.

The rain kept falling outside. Even though the technology had changed, it felt as if we were snuggled up here in the car with the bard himself telling us this tale. Where the rain and boredom might have started fights, now all three of us were peacefully together, pulled closer as a family by story, like so many before us.

Inspired by those rabbits, I decided to be brave. It was worth risking a dead car battery to keep listening to this tale. Besides, would they save the farmer and his family?

And would they survive the far more dangerous battles ahead?

We had to find out.