Kid lit artist and author, Emma Reynolds, speaks about her #Kidlit4Climate campaign which grew from one twitter post into a viral sensation.

The environment’s always been something that’s important to me. When I was a young kid in the 1990s, we were very aware of animals being close to extinction. We were aware the ice caps were melting, but it was very slow so it was not something to worry about so much. It was always something in the back of your mind. There’s too much pollution, we’d always think of that too. And that the sun would explode, but not in our lifetimes.

Ignorance is bliss. I’ve had a few years of blissful ignorance before now. It’s in the last couple of years that I’ve become much more aware of what we’re doing to the planet and how bad it really is and I wanted to do something.

It was late February this year when we had that crazy heat wave. At this point Greta Thunberg and her School Strikes for Climate were starting to get a lot of press and momentum, but there was also a lot of backlash from adults not taking these kids seriously. I thought to myself – when am I going to do something? I didn’t want to look back on this point in history and think I wish I’d done something. I thought, I spend all day making content for children and young people and if we can’t support them as authors and illustrators then what are we even doing?

An epiphany on the treadmill

Thinking what can I do within my field, I went to the gym.  I had an epiphany on the treadmill. I went home and did it all in a flurry of inspiration in a few hours. I should have been doing other work, instead I drew the logo and put a brief online for people to draw and illustrate a protestor in support of the youth climate strikes.

I didn’t go into this thinking that I’m going to make this viral. I didn’t have any expectations really. I reached out to about 30 of my illustrator friends and said, would you like to do an image? I thought I’d maybe get about thirty back and I was going to put them in one big image together. That would have been enough, but it absolutely exploded and within the first two weeks I’d been sent a thousand illustrations. It was completely nuts

Middle of a deadline

It was quite difficult at first. I was in the middle of a deadline when I first put it out and I had not anticipated it taking up much more of my time. For the first week, I spent that solidly on social media just reposting, emailing. It took a lot, a lot of time.

I think a lot of people were starting to wake up in the same way that I had started to, that climate change is the biggest challenge humanity will ever face. Climate anxiety is a huge problem now, people are scared. It’s extremely overwhelming. The campaign captured the underlying fear. Everyone felt so helpless and they didn’t know what to do and they didn’t know where to put that energy.

Now, six months on there are over 2500 illustrations. The campaign showed the young people that we’re listening. A lot of people actually messaged me saying, ‘Thank you for giving me a way to express my fears and concerns.’ Some illustrators said they went on to protest in person.

So many talented people

I was delighted when so many people I admire agreed to take part. But the best part of this has been finding out about so many illustrators from around the world that are so talented. And some who have not broken into the industry yet. So many talented people. I’m still completely blown away that so many people have taken part.

Kidlit4Climate was going to be a thing just for the climate strike on the March 15th but it’s got so much momentum and people are so interested in it that I’ve just kept going. It’s basically just me running this in my very limited spare time so in recent months I haven’t been able to put as much time into it as I did at the beginning, because I need to earn money. I have to have a job.

I’ve literally just handed in my final draft of the book I’ve illustrated so now I can start looking at this again. The next big global strike for the climate is on September 20th. I will start the build up towards it and do more posts and encourage people to take part in their local protests.

It’s still early days for this campaign. I do feel that we can do more and reach a bigger audience. That’s exciting. 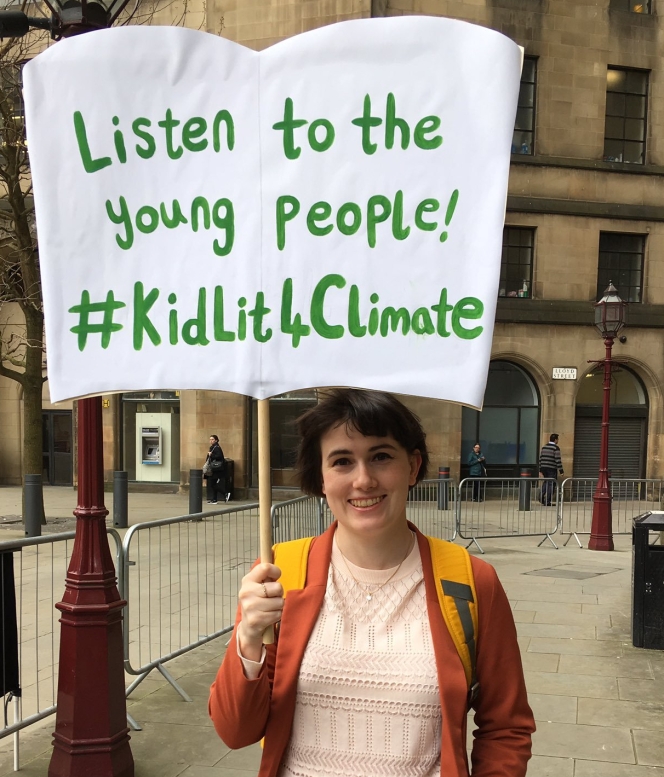 Emma’s first illustrated book ‘Rescuing Ms. Birdley’ written by Aaron Reynolds, is coming out Summer 2020 with Simon & Schuster. Her debut author illustrator picture book, ‘Amara and the Bats’, is to be published in 2021. Find out more  at https://emmareynoldsillustration.com/

Thank you to all the fantastic artists who gave me permission to use their illustrations here.

Finally…. the next big climate strike is on the 20th September.  It’s open to everyone – students, non-students, young and old. Bring your friends and family. Let’s make this one the biggest one yet!