At the recent Children’s Books Ireland conference, a group of teenagers in black jumpers filed in to sit at the front of the room.  Two of them of them took to the podium telling the audience about the literary festival for teenagers called the Lit. One even read out her poem.

They told us that the Lit is on the 15th and 16th November in Waterford City. It features Dave Rudden, Sarah Crossan, Colm Keegan and other established authors and poets as well the members of the Lit committee themselves. Check it out here.

To find out a little more about the Lit, I interviewed Libby Marchant, the 17 year old Lit committee member who bravely read out her poetry at CBI.

Are you unfazed by reading your poetry outloud?

Oh no. I get so nervous. My poetry when I write it comes from a really deep place in myself and it’s a piece of my heart on the page reall. When I’m reading it out I’m really exposing myself. But it’s such a huge payoff after I’ve finished. I always feel amazing afterward.

It impressed me. I thought the poem was really good, but also it totally reminded me of the poems I used to write as a teenager. It made me wonder why I don’t still write them. Do you have any sense why many grown ups might stop writing poetry?

I’m not sure. I made a joke about it at the conference when I went I went up and said, ‘Here’s a nice three minutes of teenage angst.’ I feel like teenagers are completely, unashamedly emotional. I can’t speak for every adult or teenager, but I think that teenagers are experiencing everything for the first time. It’s almost fresher. It’s more intense. Maybe that’s why they write poetry.

It struck me when you were reading that I still have a lot of those same emotions, but I’m more cautious about expressing them in as direct a way.

I also think that it’s a problem with teenagers. I think it is a problem that all ages have.

We’re great in the Lit that we provide a space for teenagers to be utterly and truly themselves. If someone’s going through a break up or something then the whole committee will know about it. There will be about ten poems read out about it over the next two weeks.

But it’s just a minority of teenagers that come to the lit. It would be so amazing if more teenagers could hear poetry like that and realise that other people are struggling and there are ways that you can write poetry and express yourself.

Is reading and poetry a popular thing in your school?

A small majority would regularly read books in my school. I think it’s just the stigma around it, but I think everyone inherently loves poetry and books. It’s just a few people who are brave enough to actually say it.

We are hoping as the Lit to make it less taboo and make it more normalised for teenagers to be nerdish and read and write poetry, but I don’t think it has quite happened yet.

So to be big into reading is seen as a nerdish activity?

I’m not sure if I was supposed to answer that with a yes or a no. I’ll say they’ll all be giving out to me in the committee, but I’ll just be honest with you, it is kinda nerdy.

It’s nice in the Lit because everyone is a nerd and everyone knows we’re all as equally uncool as each other.

My generation of teenagers, we’re a bit feisty and bit rebelly and an angry generation and that where’s good poetry and good literature comes from. It comes from people being angry about stuff.

What do you think makes you an angry generation?

I think that at the moment we’re at a very turbulent place what with a certain presidents and certain Brexits and certain climate changes. I’m 17 now. I’m going to be 18 next year and that’s when I supposedly inherit the earth. I’m inheriting a mess.

We are angry. We grew up in the early 2000s where it was Celtic Tiger and everything was amazing and all of a sudden the crash happened. Ever since then we’ve been constantly told there’s no jobs, there’s no money, the planet’s going to die soon. That’s why our generation is so proactive.

Have you always written?

This is the creative writing group in the central library in Waterford City?

Yeah. I stayed in the group because our creative writing teacher, Eimear Cheasty, was so accepting. You could literally talk about anything and she would not bat an eyelid. It was so unusual for me because I go to an all girls catholic school which means there are lots of subjects which we just aren’t allowed to talk about. It’s hard because if you’re dealing with things that are too uncomfortable to say or too taboo for people to talk about in school then where are you supposed to talk about them.

How many people are there in your group?

And did you all know each other beforehand?

I actually joined not knowing anyone. The majority of us are in different schools, different years, we live in different parts of waterford, but, like honestly, we’re a family at this point. It’s really great.

So this the third year of the Lit festival. What is its original story?

Eimear was like, ‘Guys we need to have a big event.’ So we all just got together as a group and decided that we wanted to do something a bit bigger than an anthology. We decided to do a festival and then just from the creative writing group we made a separate committee to run it which we still have today.

Do you have the same kind of connection with the committee as you do with your schoolmates in school?

It’s very different. Obviously, we have to share a lot of our work with each other so that means we get a lot closer because obviously our writing would be personal to us. On the other hand we go from reading out a super personal poem to being, ‘So, did you ring that author back?’ It’s an unusual dynamic but we get to see the best parts of one another.

Teenagers lives can be quite limited. You’re quite controlled to varying degrees by parents and schools. How different is creating the Lit to the rest of your life?

So different. So amazing. We don’t have to ask to go to the bathroom in creative writing classes which is always a plus. We’re not treated like teenagers. We’re treated like young writers who want to organise a festival.

Now when I join other youth committees, I’m always so shocked at how controlled they are. I know that some people might find it hard to believe but, although Eimear helps us and we’re very grateful to all the people who have helped us along the way, we genuinely run the whole festival. We’re the ones who send the emails. We’re the ones who get it done. If we want something done then we’re the ones who make it happen and we don’t rely on someone else.

It’s so different from in school. In the Lit we are the experts.

Makes me thing of all this nonsense about Greta Thunberg being sixteen so someone must be manipulating her and she can’t be in charge of her own choices.

Yeah, definitely. I think at the start, we got that a little bit. People were like, ‘Oh, this isn’t going to go anywhere. This is just a bunch of teenagers.’ But we just kept going and every time someone wouldn’t answer one of our emails we just sent five more. We had to earn that respect. We run a tight ship.

I do think that people need to start taking teenagers more seriously. In the climate change thing, it’s teenagers who are going out protesting. There’s been a fall in the love of literature and poetry and we’re the ones who are working hard to get that back up again so we deserve that respect.

So you’re not only organising it, you’re key participants in it?

We’re not going to miss out on all the fun. We wanted to also participate in it because it’s such an amazing opportunity.

Oh, we’d have no presentations by authors. We have authors doing some readings and we’ll have some panel discussions. All the workshops will just be young people writing their own stuff. We’ll have a few events where there’s no authors at all and it’s just young people reading out their own stuff and authors have to sit down and listen for a sec.

Have you all had the opportunity to read out your work publicly?

Probably not. Myself and Daisy are more into the public speaking and doing the interviews and stuff. I’m actually the one in the committe in charge of organising bimonthly open mics. Basically we rent out a gallery in Waterford. We have usually 30 regular teenagers, but we get around 40 teens. We read out our stuff. There’s comedy sketches, poetry short stories, music. It’s really amazing.

It strikes me that what you’ve done with this is take something special that you had in your small group of 17 or 18 and made it bigger and bigger so that other young people can benefit from it.

I think it’s that community of acceptance that the Lit has grown inspiring people to write and share their work which is so amazing.

We’ll have people who came down to the Lit all by themselves from Dublin or wherever and they’ll write this absolutely amazing poem about mental issues they’ve had and they say to us at the end, ‘Jesus, I didn’t think I was going to write a poem about that but I did.’

The likes of Colm Keegan are so good with teenagers and bringing them out of their shells. There’d be one girl or boy being all quiet. They don’t want to share their work, but by the end of the workshop they’re standing up on the table screaming their work at the rooftops.

In the open mic sessions, there was one girl who started coming when she was in second year. Now she’s in forth year. Just in an open mic there about two weeks ago, it was the first time she ever read out one of her poems. The atmosphere was amazing. Everybody stood up and applauded her and she had tears in her eyes. It was such a big experience for her.

We’re so proud of the Lit and what we’ve done.

Do you know that song, ‘Sisters doing it for themselves’?

I’m thinking of calling this blogpost, ‘Teenagers doing it for themselves.’

Sure, that sounds great. 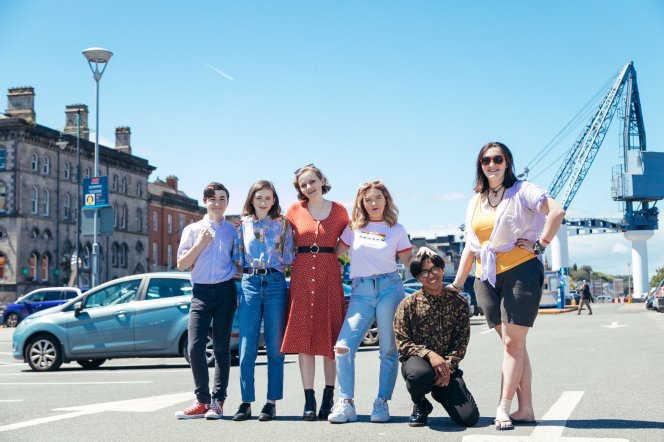 Thanks so much to Libby for taking part in the interview and for being so polite about the silly title I’ve chosen for this blog post.

The Lit takes place on the 15th and 16th November in Waterford city.  Please do check out the website for The Lit  and get your tickets soon!

Spread the word far and wide!